During the Battle of Koonja the Honourable Mr Frederick Shore, the Superintendent of Dehra Dun, was part of the group of Goorkhas which battered down the massive door of the fort with a tree trunk. Once inside the fort he continued to pursue the rebel Goojurs and on the roof of a house leading to the ramparts he came across one described as ‘a gigantic ‘pahlwan‘ or wrestler.. This rebel was armed with a heavy sword and shield and attacked Shore furiously, calling out ‘What! You too have turned sepoy? ‘. Shore, who was a good swordsman, was handicapped by having a damaged shield, but Captain Young rushed to his assistance ‘by levelling his manton [a flintlock pistol made by the gunsmith Joseph Manton] at the wrestler. The first barrel misfired but the second ball took effect on the rebel’s chest as he lunged at Shore, who survived the assault despite a gash to his side’. 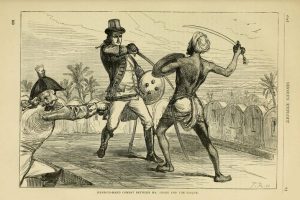 An artist’s impression of the incident from the Illustrated London News.
Captain Young of the Sirmoor Battalion is on the left.