Colonel Reid with 13 Goorkha Officers and 701 Rank and File (in 8 companies) marched to Oudh to take part in the suppression of rebel bands which still infested that part of India.  They and several other units that had been sent there were also looking for Ferozeshah, son of the rebel Emperor of Delhi, but they failed to find him.  The Sirmoor Rifles remained in the area until April 1859, quelling disturbances and dismantling forts.  They were present at the capture of Kurabad and Biswah, but were not involved in much fighting.  The campaign is notable for the force of 6000 soldiers sent from the Nepalese Army to aid the British, who paid handsomely for them and also restored some 2000 square kilometers in the western Terai to Nepal as additional compensation.  They were led by their Prime Minister Jang Bahadur Rana ‘who rendered valuable assistance’ and was given a British knighthood. 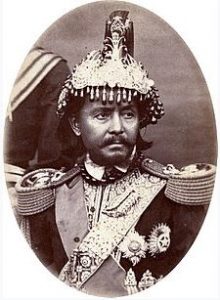