The response by the British Government to the armistice in the Russian-Turkish War, but a continuing threat from Russia, was to send four battleships to the Dardanelles and position a military expeditionary force of 7000 from the Indian Army in the Mediterranean. The 2nd Goorkhas under command of Major Battye left Dehra Dun for Bombay to join 2nd Infantry Brigade, commanded by their former Commandant Colonel H F Macpherson VC, in Malta. 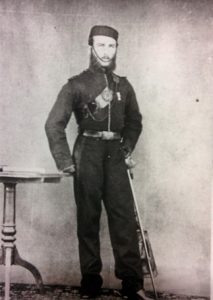 Arthur Battye, who commanded the 2nd Goorkhas from 1880-86 and then retired as a full Colonel to live in the Naval and Military Club (the ‘In and Out’) in London. He subsequently rose, in retirement, to the rank of Major General on the Unemployed Supernumerary List, as was the custom in the late 19th century as a way of increasing the pensions of worthy senior officers.