The 2nd Goorkhas reached Sherpur Cantonment near Kabul after a difficult march from Gandamak in harsh winter conditions, as part of General Gough’s brigade. The Regimental history states: ’This march was carried out in the rigorous winter, under great hardships which resulted in the loss by exposure and cold of numbers of mules and drivers, which showed the impossibility of conducting military operations in Northern Afghanistan at this season.’  Towards the end of December the Regiment joined a Column commanded by Colonel Jenkins to impose punitive measures in the Koh Daman Valley, north of Kabul. 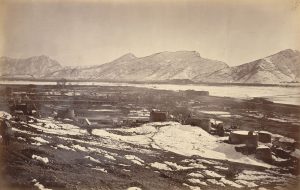 North-West end of the Sherpur Cantonment in 1879.  The picture was taken by John Burke, an unofficial photographer accompanying the Peshawar Valley Field Force.