As part of a wider plan to capture Kut, at 05.40 hrs on this day the 1st Battalion began crossing the Tigris in boats rowed by men from the 1/4th Battalion The Hampshire Regiment and the 1st King George V’s Own Bengal Sappers and Miners.  This was a preliminary move prior to attacking the Turkish positions at Dahra, some 3km to the north of the crossing.  They came under heavy fire and suffered considerable casualties at the first two crossing points but at the third they gained a foothold, Royal Engineers constructed a pontoon bridge, and by nightfall a bridgehead had been established. Losses, including attached personnel rowing the boats, were 80 killed and 43 wounded.  Thereafter 23rd February was celebrated annually within the Regiment as ‘Tigris Day’ to mark the 1st Battalion’s achievement in 1916.  Click here to read an account of the campaign, including a longer account of this action. 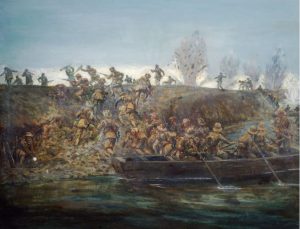 The Tigris Crossing, painted by Lionel Edwards.  The original hangs in the MacDonald Room of the Gurkha Museum, Winchester.