In Mesopotamia, the 1st Battalion moved out of the bridgehead on the north bank of the Tigris to capture Turkish positions blocking further advance. Intense fighting lasted throughout the day before orders were issued to withdraw to a bivouac area. In two days the Battalion’s losses (excluding attached personnel rowing boats on the river crossing) were: one British Officer, two Gurkha officers and 69 Other Ranks killed; two British Officers, one Gurkha officer and 72 other ranks wounded. Coordinated British attacks across the Corps’ front resulted in the enemy being routed and sent in full retreat to Baghdad.  Click here to read a description of the campaign, including a longer account of this action. 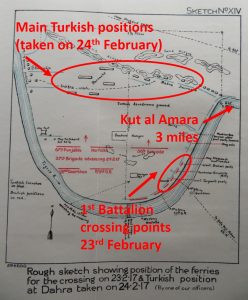 Sketch map from the Regimental History showing the crossing points on the River Tigris on 23rd February and the Turkish positions about 2 miles to the north taken on 24th February.