The 1st Battalion, on the North-West Frontier, was ordered to load 16 camels into 8 three-ton lorries. Unfortunately the hump of the first to be loaded got caught on the metal framework for the tarpaulin, and the straining and pulling needed to release it evidently loosened the camels’s digestion, resulting in the work party being covered with the digested remains of the camel’s last feed. To avoid this happening again, the remaining camels were lashed to poles and lifted bodily into the vehicles. 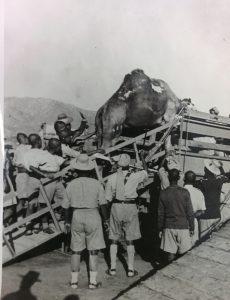 Camels being loaded into lorries by 2nd Goorkha soldiers in Waziristan, 1937