In the Officers’ Mess in Dehra Dun there was a small serving hatch about 18 inches square. On Guest Nights such as the one on this day, it was the custom for all guests to be sent through the hatch in order of seniority (to ensure more junior ones could not refuse the ordeal). It was ‘great sport to see a visiting General smoking a cigar and sipping brandy being approached by a subaltern who would politely offer to hold them. He was then seized by four other officers and rammed through the hatch to be caught by others on the other side and helped to his feet. His cigar and brandy were then returned to him. It was something of a struggle to get some portly officers through.’ 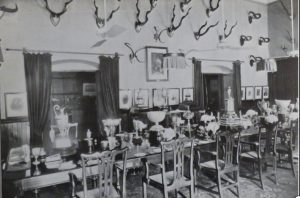