In scenes of ‘utmost confusion’ the 2nd Battalion withdrew from the Slim River line. The Companies withdrew across the river at different locations, several men drowning in the process. Total casualties during the crossing were three British Officers, six Gurkha Officers and 196 Gurkha Other Ranks missing. The survivors were transported 24km south to Rasa on the Sungei (River) Selangor although most of A and C Companies broke up into small groups to try and exfiltrate southwards. Very few succeeded in doing so and most either died or were captured by the advancing Japanese. 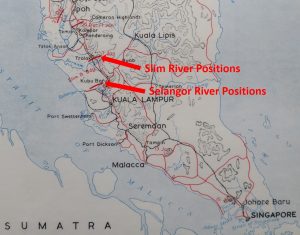