A two-platoon strength raiding party from C Company of the 1st Battalion crossed the North African front line and attacked a strongly-defended enemy position, Point 62, at night.  This was part of the deception plan for Operation Lightfoot, a preliminary move in the second battle of El Alamein. An artillery barrage was to be followed by bren carriers pulling aside enemy barbed wire and Sappers lifting enemy mines prior to the 2nd Goorkhas’ assault.  It did not go entirely to plan but was described as a ‘gallant raid’ by the XXX Corps Commander, Lieutenant General Sir Oliver Leese.  8 men were killed and 17 wounded.  The commander of the raiding party, Lieutenant Carrick, was wounded and captured by the Germans but in 1945 escaped from a prisoner-of-war camp in Germany.  Jemadar Harkabahadur Thapa, who later became Gurkha Major of the Battalion, was awarded the IDSM for his handling of the bren carriers. 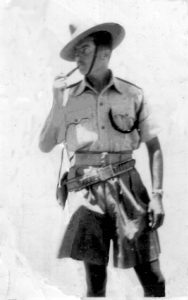