Brigadier Lionel Showers, who had commanded the 1st Battalion in North Africa, recalled in an article he wrote for the 1973 Regimental Journal: ‘We were again pulled into Corps Reserve as the advance crept forward and reconnaissance was made of the next German defensive position at Wadi Akarit.  I remember an amusing incident on 1st April [1943] when as an April Fool jest we fired off every weapon we had. This caused a great panic at Corps HQ who thought the Huns had broken through. To their frantic signals we replied that we always tested our weapons after a period of action.’ 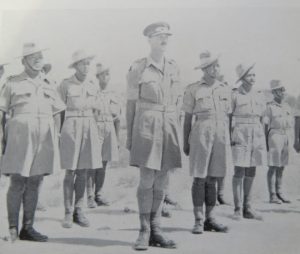 Lionel Showers (centre) as a Lieutenant Colonel commanding the 1st Battalion, awaiting the arrival of His Majesty King George VI to review the Battalion in North Africa, 19th June 1943.  On the left of the picture is Subedar-Major Narbahadur Gurung and on the right, next to Showers, is Subedar Lalbahadur Thapa VC.