Reminiscence by Lieutenant Colonel Showers, Commandant of the 1st Battalion in North Africa: ‘Accompanied by my orderly Rifleman Sarghana Limbu , we drove a short way to where there was the whole of the Afrika Corps HQ calmly waiting to surrender. I must have looked a proper pirate with a patch over my eye, a kukri and pistol on my belt, unshaven, sweaty and dusty and with Rifleman Sanhana trusting no one with his tommy gun at the alert. General Von Armin was taken away while his Corps HQ officers and men lined up to say farewell. There were no Nazi salutes or Heil Hitlering, just smart military salutes. It was impressive.’ General von Arnim later formally surrendered to Major General Tuker, late 2nd Goorkhas, the Commander of 4th Indian Division. 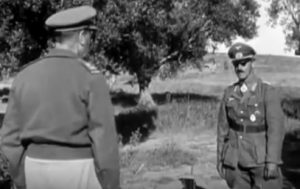