The 1st Battalion advanced towards Cassino Monastery from the north, following heavy bombing of it by Allied airpower, in the second of four battles to try and take Cassino. The attack began at midnight but failed in the face of strong opposition. Casualties were heavy: 3 British and one Gurkha Officers were killed; three British and four Gurkha Officers were wounded, including the Commandant, Lieutenant Colonel Showers; and 34 Other Ranks were killed or missing and 104 wounded.  Heavy rain prevented further immediate attacks. 4th Indian Division remained in place, sustaining 40-50 casualties a day from artillery, mortar or sniper fire.  The 1st Battalion, badly mauled, moved out to a new sector near Orsogna in late March before the next assault took place. 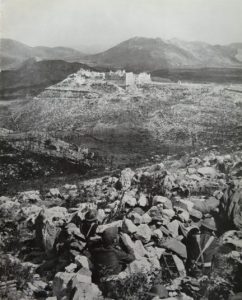 View of Monte Cassino Monastery from the Snakeshead feature, showing the open ground over which the 1st Battalion advanced.