D Company of the 1st Battalion had moved to Lacesta in Italy. Before dawn the company ration train was ambushed, one Rifleman being killed. In the afternoon a reconnaissance party led by the Commandant walked into a company of Austrians of 5 Mountain Division, who were resting without having posted sentries. They fled, but a spandau started firing and Captain Marley-Clarke was killed. Captain Miller, who had dashed forward with a platoon of B Company, got so exasperated by his American carbine misfiring 8 times he threw it away and led the chase of the enemy with his bare hands.  Click here to read an account of the Regiment’s campaign in Italy. 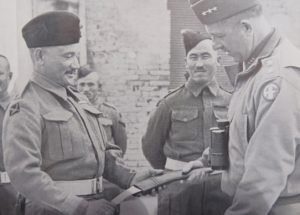