From an article by Major Scott Leathart Journal in the 1992 Regimental Journal: “The 1st Bn was stationed at Poona when on New Year’s Day 1948 we became part of the British Army. On 23 January 1948 I set off for Calcutta with an Advance Party comprising 46 All Ranks. After many vicissitudes on the run-down Indian railways we reached Calcutta, only to become engulfed in Indian bureaucracy tinged with political spite. During the small hours of 28 January 1948 we emplaned in a RAF Transport Command Dakota and after a flight lasting 11 hours and having refuelled in Rangoon we eventually reached Tengah airfield in Singapore.” 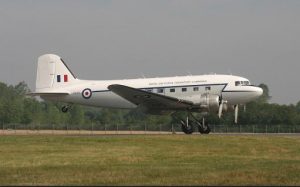 A RAF Dakota: not a comfortable aircraft for an 11-hour flight.