From about this date Sam Browne belts were worn in Barrack/Office Dress and Service Dress instead of crossbelts, although the latter continued to be worn in ceremonial uniform and would again supersede the Sam Browne in less formal orders of dress in the late 1960s. 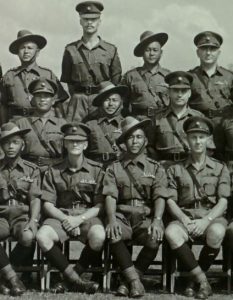 British and Gurkha Officers of the Regiment in Singapore, 1958, wearing Sam Browne belts. The British Officers are wearing Service Dress hats (with a peak) which were also later abandoned in favour of side-hats.