Both Battalions celebrated the centenary of of the Regiment’s historical stand on the Ridge at Delhi. A parade was held in Slim Barracks, Singapore. The Truncheon was held by Honorary Captain Kalusing Chhetri, the oldest pensioner. The two living 2nd Goorkha VCs, Subedar Major Lalbahadur Thapa SSB, VC, OBI and Hon Havildar Bhanbhagta Gurung VC were both present, as was the Secretary of State for Defence (Duncan Sandys) and other VIPs. No less than 5 days of celebrations followed, including a grand nautch (Nepalese dance and party), a memorial service, sporting events, dinner nights and a Delhi centenary ball. 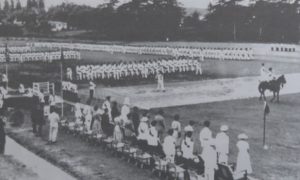