250 men and a Tactical HQ of the 2nd Battalion embarked on the commando carrier HMS Bulwark for a 3 week exercise, practising helicopter-borne landings and modern warfare in the Kota Belud training area in North Borneo (later renamed Sabah). 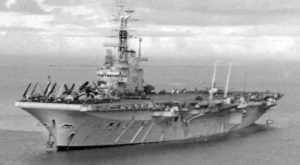 HMS Bulwark (R08) at Singapore during the SEATO exercise ‘Ocean Link’ in 1958.
Later that year she was re-commissioned as a commando carrier in which role she
carried the 2nd Battalion in 1960