The 2nd Battalion’s Assault Pioneer Platoon, under Lieutenant Nandaraj Gurung, set an ambush at Batu Lintang in the 2nd Division of Sarawak. They were expecting a few Indonesian soldiers in civilian dress on their way to a cockfight in a local village, but the ambush was sprung by a fully-armed raiding party of about 100. After beating off a counter-attack Nandaraj called down artillery fire on the enemy’s likely escape routes. It was later confirmed 13 had been killed. Lieutenant Nandaraj was awarded the Military Cross and Rifleman Reshambahadur Thapa the Military Medal for his brave and aggressive use of a Bren gun to beat back the Indonesians once the ambush had been sprung. 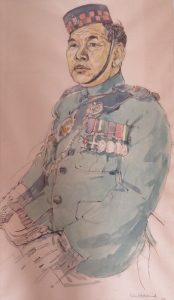 Watercolour painting of Nandaraj Gurung as Gurkha Major of the 2nd Battalion, by the artist Ken Howard.