In Borneo, elements of 3 companies of the 2nd Battalion were ordered to lay ambushes along 3 rivers in Operation Kingdom Come. Elements of D Squadron SAS under Major (later General) de la Billière were placed under command of the Battalion for a separate but simultaneous river ambush. Extremely bad weather made the going very difficult and flooding meant it was difficult to distinguish the rivers from the surrounding countryside. Rafts and temporary bridges were used to try and make progress.  Click here to learn more about the Regiment’s involvement in the campaign. 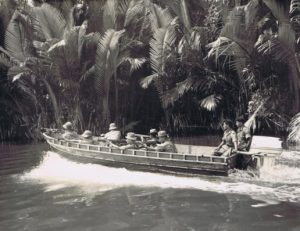