Support Company of the 2nd Battalion under Captain Christopher Bullock had mounted a river ambush on the Sungei (River) Sentimo, used by the enemy to move troops and supplies. The operation was codenamed ‘Hell Fire’. They were surprised by an unexpected land attack by an enemy foot patrol resulting in the ambush being withdrawn under fire. Rifleman Ramprasad Pun, a Bren Gunner, was awarded a Military Medal for his part in the action. In the confusion the wounded Company Sergeant Major got left behind, but an operation mounted by D Company eventually found him and enabled him to be rescued by helicopter, a daring operation at last light to winch him out of the jungle in a small clearing cut quickly for the purpose. 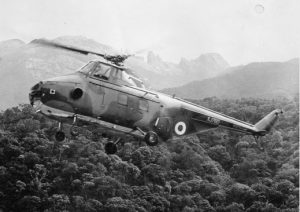 Westland Whirlwind helicopter of 110 Squadron RAF, similar to that used in the rescue, over the Borneo jungle.

Click here to read an account of the campaign in which this action and that of C Company (mentioned above) took place.