The 1st Battalion and 42 Commando Royal Marines provided the enemy in Exercise Bersatu Padu (‘Allied Unity’), a 5-nation Commonwealth exercise in Trengganu in the north of the Malay peninsula. It was designed to show how Britain and its allies could still mount effective operations east of Suez. Friendly forces were 4th Malaysian Infantry Brigade, which included Australians and New Zealanders, and the British 19 Infantry Brigade which had flown out from the UK. The exercise ended on 4th July. 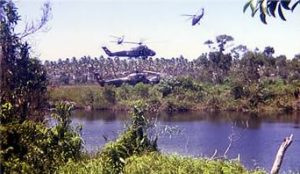