The 1st and 2nd Battalions merged to become the 2nd Goorkhas, a designation not used since the 2nd Battalion had been raised in 1886. At a parade at Cassino Lines, Hong Kong, those men either leaving on redundancy or transferring to other regiments saluted the Queen’s Truncheon for the last time. 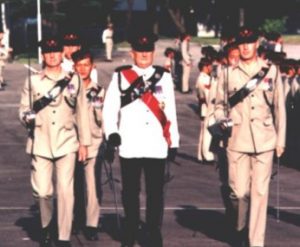