1986 saw the 2nd Battalion celebrate its Centenary of service to the Crown. Although the Battalion was raised in February 1886 it was not possible to celebrate the Centenary in February 1986, due to final preparations for a 6 month tour of duty as Resident Battalion in The Falkland Islands.

There were two major events in 1986 to commemorate this historical achievement.

On the weekend of 13 and 14 September 1986 the Battalion, which was based in Queen Elizabeth Barracks, Church Crookham, Aldershot, celebrated the Centenary on Delhi Day. On 13 September the battalion marched through Fleet Town at the request of the local Council, where the Colonel of The Regiment took the salute with the Mayor of Fleet, Mrs Mildred Stocks. 14 September saw the whole Battalion on parade for its Colonel in Chief , The Prince of Wales, and the handover of The Colonel of The Regiment, Field Marshal Sir Edwin Bramall to General (later Field Marshal) Sir John Chapple.

Through the auspices of The Colonel of The Regiment arrangements were made for Her Majesty The Queen to inspect The Queen’s Truncheon at Buckingham Palace on 15 July 1986, after the return of the Battalion from the Falkland Islands on 3 July. 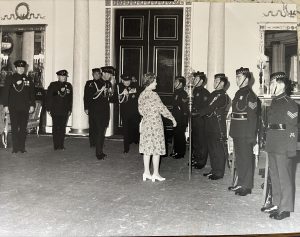 In attendance at this honour for The Regiment were The Colonel in Chief, The Colonel of The Regiment, and in order shown on the group photograph, from left to right, the following:

The inspection by Her Majesty was a very memorable event. Her Majesty took a great deal of interest in The Queen’s Truncheon, which was given the due respect and solemnity it deserved. However on completion of the inspection Her Majesty took time to chat with every member of the Escort party and accompanying officers. The time spent after the formal inspection was very relaxed , greatly assisted by The Colonel of The Regiment and Colonel in Chief, as can be seen from the smiles in some of the photographs. 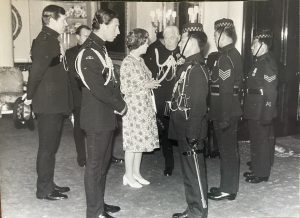 It has to be said that the presentation to Her Majesty very nearly did not take place. Although The Truncheon, with full escort, had been inspected by Her Majesty before, passage of time and changes in advisors had obviously diminished memories of previous agreements on the carriage of arms by the Escort. During the planning phase we were told quite forcibly that no weapons were permitted within Buckingham Palace. There was a time when we had to say that if the Escort was not carrying arms then The Truncheon could not be paraded. The intervention of The Colonel Of The Regiment quickly resolved the situation and on the day The Queen’s Truncheon was on parade and shown its due respect. 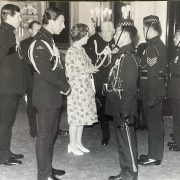 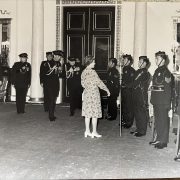