The last outing of the Season took place at the end of August – but only after Sophie Graham had defied all odds set against her, with a broken-down car, wild fires in the South of France and Covid tests to overcome. But in true Sirmoor fashion she came through with style. Her father Jon Aslett, David Santa-Ollala and Christopher Lavender made up the ‘Four’.

After our traditional `Terrace Lunch’ – taken in the Conservatory because of a chill breeze – we decamped to Lawn 6 equipped with the tools of the trade – mallets liberated from the Croquet Store. The lawns at Hurlingham were in excellent state as usual – and there was an unusual combination tasked with the rolling – see ‘Skeleton Manning’ below!

Play commenced with two rounds of Golf Croquet, with Jon and Sophie displaying much cunning, always seeming to be lined up for the hoop when their turn arrived. David played with a cricketer’s fine judgement, no doubt buoyed by the news that England were 323 for 3 at Headingley, in reply to India being all out for 78 the previous day! The first round saw Sophie and David competing to ‘post out’, with Sophie taking the honours on the second attempt. The second round saw the Aslett’s competing to ‘post out’ and once again Sophie triumphed.

David and Jon then took on Sophie and Christopher in Association Croquet. Given Sophie’s earlier performance this was probably a rather unfair pairing, and after a near faultless start and Sophie neatly ‘peeling’ her partner through the fourth hoop they were soon three hoops to the better and lined up to post out. But as so often the dice can turn, and with some exquisite ‘marauding’ by David, some delicate play around the hoops by Jon, and some terrible misses by Sophie and Christopher there was only one hoop in it! Fittingly, however, it was Sophie who delivered the coup de grace and posted out.

Tea and scones were taken in the Conservatory, and this appropriate indulgence brought the Sirmoor Croquet Society’s 2021 season to a close. Jai Sirmoor! 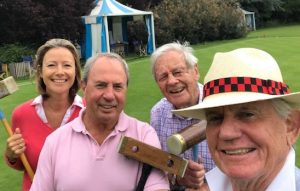 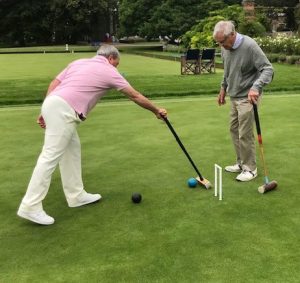 David and Jon discuss the subtleties of running a hoop.

Sophie ‘peeling’ her partner through the ‘Fourth’. 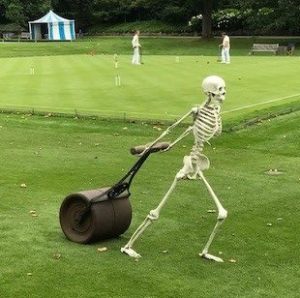 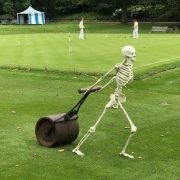 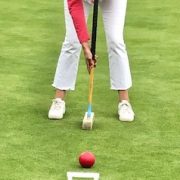 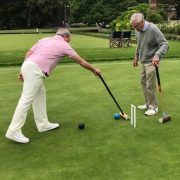 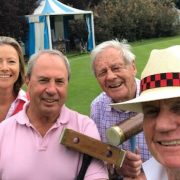