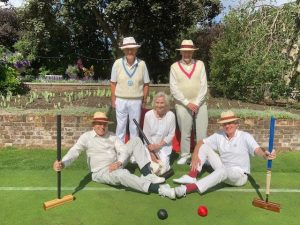 Well – fish and chips looked tasty on the menu – but in the event it was not quite what PRD and Christopher has imagined! Nevertheless accompanied by a bottle of Rose it served to fortify us for the task ahead. Peter and Annie, John Swanston and Mark Pettigrew joined Christopher and Griselda for lunch at the Hurlingham Club, basking in a perfect English Summer temperature and the croquet lawns in fine condition. Much enjoyable catching up and a little banter from Mark about Christopher’s right to bring in 5 guests as a reciprocal member (it does seem extraordinary) eventually gave way to locating the mallets and balls and taking to the ‘courts’. Croquet lawns they may appear to be – but the professionals call them ‘courts’ as in tennis! 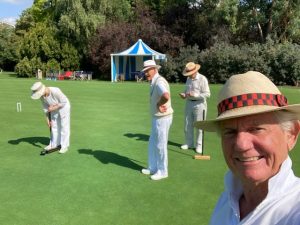 Griselda had sadly to depart for grandmotherly duties elsewhere in the Capital, and so we commenced with an individual free for all in which Mark and John emerged triumphant on 4 points (having run four hoops each), Peter and Christopher on 2 points and Annie (holding herself back) on one. We then played two games of doubles with Annie and Christopher winning by 4/3 on the first outing and John and Mark winning by a similar margin on the final run. And suitably on the afternoon that Ben Stokes and England were mauling the Proteas batsmen at Edgbaston, Mark, in similar style, took the opportunity to run the fourth hoop from a full 25 yards with a majestic stroke- winning that coveted accolade ‘Sirmooree of the Lawns (oops – ‘Courts’)’! 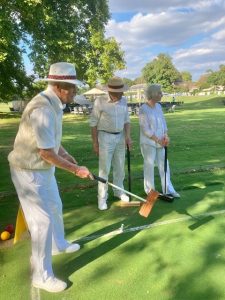 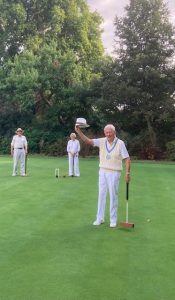 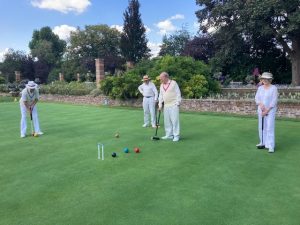 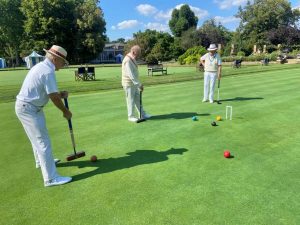 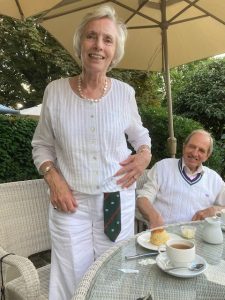 As usual the Sirmoorees contributed in no small measure to the sartotial elegance of those gracing the lawns and the courts, and Annie modelled a very appealing waist sash – which might yet take the fashion world by storm. Peter did point out though that Annie had never taken part in Public Duties!

A traditionally English tea of Devon cream and scones brought our afternoon to a happy close before the Duffells and John Swanston departed westwards, Mark down the Trinity Road, and Christopher joined Griselda with the grandchildren! 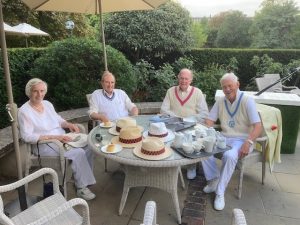 A millinery of Sirmoor Topis join us for ‘Tiffin’! 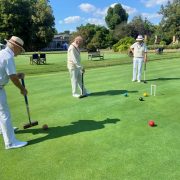 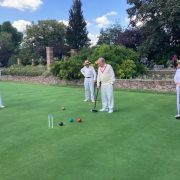 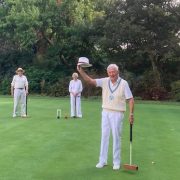 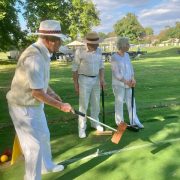 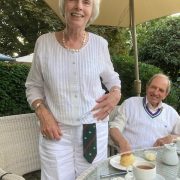 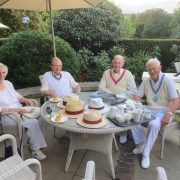 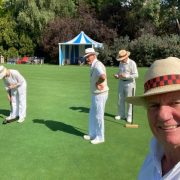 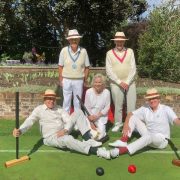