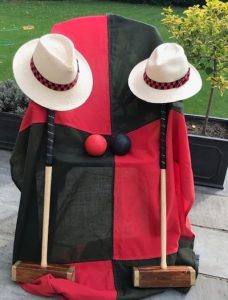 The Sirmoor Croquet Society is a relatively recent phenomenon, formed with the purpose of bringing together those Sirmoorees who wish to indulge themselves in the Noble Game. Thus far we have gathered together in the leisurely surrounds of The Hurlingham Club, wherein between consuming lunch and afternoon tea on the Terrace, we have indulged in the subtle art of propelling different coloured balls through a series of white hoops! We attire ourselves in ‘whites’ -with a splash of ‘Lali’ or ‘Dicing’ where appropriate – and play Golf and Association Croquet. Unlike cricket we don’t play for the fun of it – and ‘playing the game’ has no part in our desperation to wreak misery and mayhem on our opponents as we take advantage of every opportunity (legal or illegal) to win the game!! 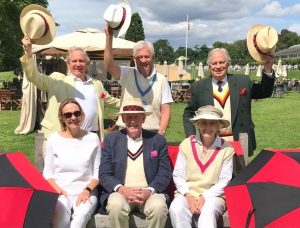 Croquet is popularly regarded as a genteel sport played with exquisite manners by the well-to-do on their beautifully mown lawns. This is a misconception – croquet is in fact one of the most vicious and malicious games known to mankind! Herbert Swope, a legendary American newspaper man and gambler, stated that ‘croquet gives release to all the evil in you’. I don’t think any other activity has ever made me so angry and close to violence. It is a game designed to cause distrust and resentment even among the best of friends. At village level the rules tend to vary according to the whims of the host, the boundaries of the lawn are often vague, cheating is tempting and difficult to spot, and the practise of impeding one’s opponent’s progress by hitting his ball out of play can seem to the victim both cruel and vindictive. It is therefore an excellent game for people like me – who lack athletic prowess but are endowed with low cunning, skulduggery, and ruthlessness. (With apologies to an article published beforehand in ‘The Speccie’) 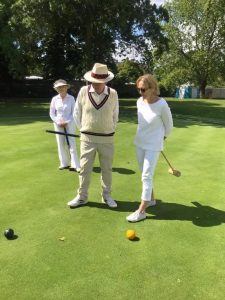 The origins of the modern game have been traced back to 1852 when a game called ‘crooky’ was introduced to England from Ireland where it had been played since the 1830’s. However, eager though we might be to place the blame on the Irish for introducing such a malevolent game to ‘this sceptred isle’, there is much evidence to suggest that the French almost certainly played a game resembling croquet as early as the 14th Century! 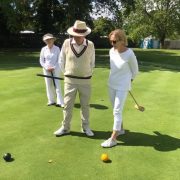 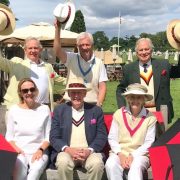 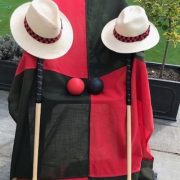