The Corps Commander briefed me: “We’ll send the Prime Minister and the Chancellor down the range in main battle tanks – lay that on Peter – and make sure she hits the target!”

I headed for Bergen-Hohne Ranges on historic Luneburg Heath to set things up. The Royal Hussars would man the British Challenger; 24th Panzers the German Leopard.

“His and Hers, for a duel in the sun, Sir?” suggested a sharp Cavalryman.

“Make sure she hits the target,” I responded crisply, as practice began.

At rehearsal, a Cavalry officer’s wife playing the part of the Prime Minister slid decorously through the turret hatch into the body of the Challenger tank. In so doing, her skirt caught the lip of the hatch and remained there; much to the appreciation of the tank crew below. We agreed it would be best if we could avoid that particular hazard with the Prime Minister.

On the day, RAF helicopters flew in the VIPs – PM and Chancellor, Ministers and Chiefs, assorted Generals, aides and functionaries. Eighty reporters were clustered near the PM’s spin master, Bernard Ingham:

“Are you in charge, Brigadier?”

“I am if this goes wrong!” I responded.

“Make sure she hits the target,” he barked. 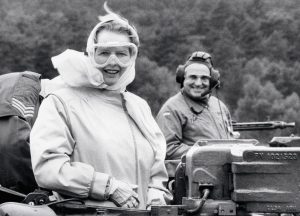 ‘A cross between Lawrence of Arabia and Isadora Duncan’, reported the Telegraph.

Ready on the firing point and safely mounted, without hazard, in their command turrets the national leaders locked tank guns onto their targets, the main armaments exploded with a flash of smoke and laser beams sent 120mm shells unerringly to their objective 1500 yards distant. Then they were off, surging down the battle run with a rumble of iron-clad horse-power and billowing dust, returning from the end of the skirmish to nervous applause from anxious Generals.

I loved it” exclaimed Mrs Thatcher, I was so relieved we hit the target”.

“First time hit!” Sergeant Penkethman told a breathless Press Corps, “I’ll give her a job when she finishes!”

Four years after the Falklands war, iconic tank photographs appeared on the front pages, restoring Mrs Thatcher’s fading ‘Iron Lady’ image and helping her re-election. The PM continued in office; the Corps Commander was promoted; Steve Penkethman was duly commissioned. I still have my signed programme. 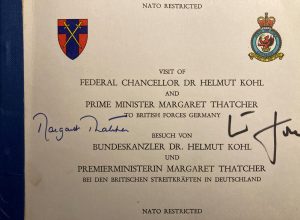