Sir, reading from the recent ‘On This Day’ post, it is interesting to know that 2nd Goorkhas (in particular Capt H Becher) were the ones who considered replacing the Kilmarnock hat. I also recall some years ago after arriving in Glasgow, in pursuit of self-interest, visiting Kilmarnock in order to find out its historical link with the ‘hat’. Only to find out that actual ‘hat makers’ were based not there but in Stewarton, a small town up further north of East Ayrshire. I am yet to go there and explore!

While in Kilmarnock, I also discovered one of Scotland’s oldest working distilleries, home to the famous Johnnie Walker (JW) whiskey which is very popular among the Gurkhas. I met a G4S security guard at the gate who told me that the factory had been closed for years, now it was only a bottling plant, all distilleries had moved up in the Highlands and I was the first visitor he had seen in years. He further said that people tend to think that it’s the world’s number one whiskey, especially the Japanese (he probably thought I flew in from Japan!) but would not say the same to himself rather it was just a commercial whiskey. He then kindly allowed me to take a quick ‘selfie’ in front of the iconic ‘JW’ sign before I headed back to Glasgow, completely sober! 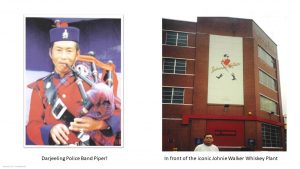 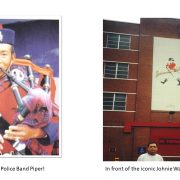 1 Comment on Hats Kilmarnock and Off the Whiskey trail!