Martin Brooks, the Chairman of the Gurkha Museum Trustees, has kindly agreed that the following article can be posted on the 2GR website.  A copy of ‘In the Presence’ is available online here.

Some of you were asking about Santbir Gurung, on Friday whose medals we saw displayed in the HQBG Conference Room.

Well, thanks to the scholarship of our Vice Patron, our previous Chairman and others, raised up by Kipling’s wonderful interpretation, it is an admirable tale of devoted Gurkha service to the Crown followed by rank injustice at the hands of the Ranas.

“The Armies of India”, The artist A C Lovett was in 1914 the CO of the 1st Bn Gloucestershire Regiment at Mons (later a Brigadier). The images include one of Santbir Gurung 2/2nd King Edward’s Own Goorkha Rifles (The Sirmoor Regiment): 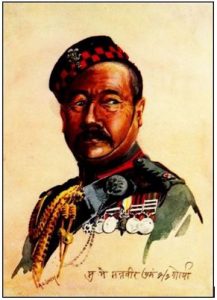 The Vigil at The Lying in State of King Edward VII

Subedar Major Santbir Gurung of the 2/2 Gookhas, Subedar Major Singbir Ghale of the 2/3rd Gurkhas, Subedar Bude Sing Negi of the 2/39th Garhwalis and Jemedar Baij Sing Rawat of 1/39th Garwhalis stood the vigil at the Lying in State of King Edward VII in May 1910. As Tony Gould points out Kipling did not name them and calls them all Gurkhas, reminding us as well that the 39th Garhwalis were originally the 2/3rd Gurkhas.

They refused all offer of interrupting their vigil and could not eat or rest much for 72 hours. This act of stoicism and reverence caused a great deal of interest and admiration in Britain, and as Richard Cawthorne, the former Chairman of the Gurkha Museum noted drew the admiration of no less a figure than Field Marshal Lord Roberts. This prompted Kipling to weave an interpretation of these Gurkhas at the Lying in State, as imagined through eyes of Sikhs and their pandit and interspersed with their own tale of honour and sacrifice; such is his genius. 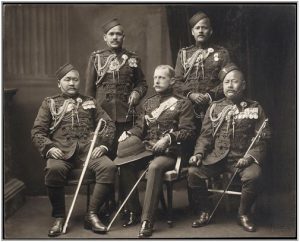 The King’s Indian Orderly Officers was a constituency of four distinguished Indian army officers chosen each year to serve as the King’s honorary bodyguard in the United Kingdom. On January 1st, 1903, the Viceroy issued a General Order announcing concessions to the Army in India in connection with Edward VII’s Coronation, notably the annual appointment of Indian officers. The first six Indian orderly officers were appointed in 1903; their number reduced to four in 1904. During the London season, from April to August, they attended the King at Courts and Levees, standing near the throne at reviews and ceremonies, always appearing in full regalia. For this supreme honour, officers were handpicked from all branches of the Indian Army, specially selected by the Commander-in-Chief himself.

The practice of King’s Indian Orderly officers attending Royal Lying in States was discontinued in 1936 and so there was no such attendance in 1952 when King George V1 died, as Richard Cawthorne notes. He also reminds us that The Queen’s Gurkha Orderly Officers were not instituted until 1954.

The Postscript was less pleasant. Honoured by King George V, when Santbir wished to return to Nepal in 1913, he “was banished both from his caste and his country by order of Chandra Shamsher, despite the intervention of George V,” as Tony Gould describes, nominally for travelling to England without his Maharaja’s permission. Shamsher like all hereditary Prime Ministers since Jang Bahadur had inherited the title of Maharaja of Kaski originally granted by the King and therefore most Gurungs were his direct subjects. Santbir had to wait to the age of 83 to be restored to caste and country.

This is cited in academic circles as a particularly egregious example of the brittle and unpleasant nature of Rana elitism during their ascendency .

On the other hand, Chandra did put his own army at the disposal of the British in 1914 and without Jang Bahadur in the 1850s, there would probably have been no Gurkhas as we know it today. 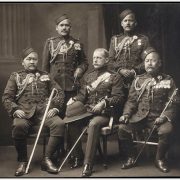 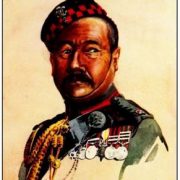