The Sirmoor Croquet season opened on 1st July at Hurlingham- the Mecca of the Noble Game. Our happy band was made up of Jon Aslett and his daughter Sophie Graham, Mark Pettigrew, David and Jo Santa Ollala- all within walking distance of Hurlingham – Christopher Lavender from Woking – and Bruce Jackman who journeyed a wearisome 7 hours from Bristol that day to be with us. Shyabash Hazoor!

We enjoyed a very pleasant lunch accompanied by a bottle of Rose before collecting our mallets and balls and decamping to Lawn 1 – the premier lawn – but as no one seemed to be playing on any other lawn that afternoon our distinguished or undistinguished play went equally unnoticed and unjudged by the Hurlingham hierarchy.

With the benefit of Mark’s gentle guidance, we paired up for Golf Croquet – a fun format with everyone playing in turn. Mark was a bit of an expert in this code – but we were quick learners and we were able to adapt our play to the speed of the beautifully manicured lawn.

We then launched ourselves into the dubious subtleties of Association Croquet, rich as it is with roquets, croquets , and all the associated tactics and rules. With Christopher advising when needed (and perhaps when not needed) the three pairings of Bruce and David, Mark and Jon, and Sophie and Christopher ‘ran the hoops’ taking advantage of additional well-earned hits as they progressed. The highlights were an exquisitely aimed 22 yard roquet by Mark on his partner (Jon’s) ball , and a similarly precise 15 yard roquet some 19 minutes later by Bruce. Jo observed that perhaps the pairing of Christopher and Sophie was the result of poor seeding – and maybe this was so -however all three pairs were on the final hoop by the time Sophie and Christopher posted out – and the tea break was taken.

Tea, and scones with clotted cream and jam, restored our energy and we spent the last period enjoying the less complicated Golf Croquet again. Playing with three pairs proved problematic in that advancing through even one hoop with six players was almost impossible. We therefore split into two games of three players and this brought the afternoon to a close. We then dispersed to our various points of origin – with Bruce having to endure a four hour journey on the M4.
Click on this link for more photographs: http://2ndgoorkhas.com/gallery/sirmoor-club-croquet-july-2021/ 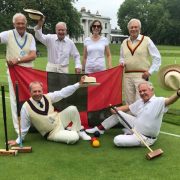